Shocker! Power On has come out of nowhere to seize the lead with 2 days to go in the Media League Finals. Scores of fans are signing up to support Power On and those fans are having an impact, as Power On has leapfrogged from 4th place to 1st in one day, with a total of 18,518 points (as of this writing). John P Stevens now sits in second with 14,081 points, followed very closely by North Point High with 13,313 points and Life in Pixels with 10,587.

The pressure is on the 3 other finalists now. Can they get enough support from their classmates and community to overcome Power On’s sudden surge? We’ll know soon.

Given their sudden success, it’s fitting that it’s time to profile Power On, the Vegreville Composite High School Media Team. Located outside of Edmonton, Alberta, Power On have been locked in a creative battle with provincial rivals Life In Pixels all season long. Coached by Randy Pond and Assistant Coach Tracey C, the team has 7 members, including Cynthia W, Jason, Angelica, Samantha K, Bayley S, Alex S and Ayslan D.

Overall Power On are visually-oriented, but this team may have been more creatively diverse than any other in the league this season, contributing drawings, photography, 3D models, music, paintings, poems and more. In addition, Power On is one of only 2 teams (along with JP Stevens) to participate in every single game of the season and the playoffs. Way to go Power On!

Power On’s Finals Game Media consists of 2 drawings and a photo-montage, all exploring the game theme, which is LOVE. Both of the drawings are inspired by songs, one old and one much more recent. The older one is The Beatles’ “All You Need Is Love” a drawing that features three couples: boy-boy, girl-girl and boy-girl. Like Love is Genderless by Life in Pixels, this piece makes a strong social statement, but here the anime style is very different, and the carefully rendered characters are outsiders looking out at us with a hint of both pride and suspicion.

The first song that inspired a Power On drawing was all about love but the second one – Muse’s Unintended – is itself a powerful love song, and that is a very different thing. The drawing, called “…you could be my Unintended Muse” is of a fractured heart. What makes it especially interesting however, is that every element of the drawing is made up of the lyrics to the song, which means that the drawing is more of a concrete poem than a drawing. Even the shading consists of partially erased words, creating an unusual and intriguing visual effect. 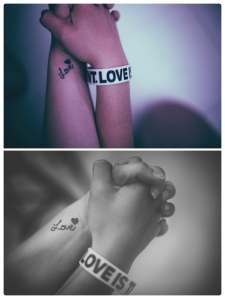 . Two versions of the same intertwined hands, both inscribed with the word love, one on a bracelet and the other tatooed on skin. There is a lovely sense of duality in this piece, from the fact that it consists of a pair of hands and a pair of images, to the contrast between the black-and-white and colour images, between the bracelet and the tattooed wrist, and lastly in the intertwining of the hands, giving the single word Love a sense of tangibility, of variety and of strength. Very cool!

The Media League is a competitive creativity contest where talent matters, but so does enthusiasm and support. Power On grasped early on that part of the fun of the Media League is creating cool artwork but another part of the fun is getting other people to pay attention to support that creative effort. In this Championship Game that combination of talent and support currently has them sitting at the top of the standings.

Will they still be there at the conclusion of this game? Who knows? But what we do know for sure is that Power On have been very enthusiastic, creative and worthy participants in this inaugural season. We’ve been happy to have you on board, Power On!

Now you’ve met all our four finalists in these daily Countdown posts. And with 2 days left its time for everyone who likes art, who likes, love, who likes their Media Team, who likes these artists or goes to one of these schools, to get busy supporting your team. Soon, very soon, the champion will be crowned. We’re glad you’re doing it and not us because there are so many awesome works to choose from. So go ahead…choose, share, rate, view! 2 days left!