My late father Ken was a great writer who spent much of his career working in educational TV. He started writing for Nelvana back in 1975, when the global animation giant was just a gleam in the eye of its founders. He wrote or contributed to many series for them over the years, and many of their early hit specials as well. 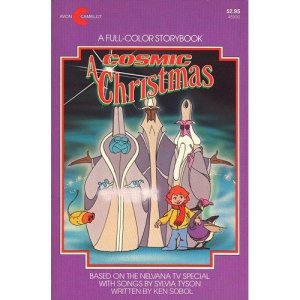 A Cosmic Christmas, from 1977, helped put Nelvana on the map. I was under the impression my dad wrote the screenplay for it but according to Wikipedia this is not so, though I know he wrote the book (right), and sometimes then (as now, unfortunately) in the highly unethical TV business credits end up being strangely reassigned after the fact. But either way, I thought I’d share this out-of-this-world xmas special from the pre CGI days. It’s a treat. Happy holidays!

One thought on “Remembering A Cosmic Christmas”