With 6 days left to go in The Media League’s Championship Game the score is VERY close. As of this writing, John P Stevens has 2492 points, Power On has 2296 and North Point High has 2155 points. And we’re still waiting for Life in Pixels to enter the game. Clearly the 4 finalists are biding their time and feeling each other out with only 4 of a possible 12 pieces uploaded so far. We can expect to see the heat turned up fairly soon…

In the meantime, let’s look back at the highest-scoring entries of the regular season and the first round of the playoffs.

Kicking off the competition, John P Stevens established its credentials early with an exceptional contribution to Game 1 – Digitopia. Their piece is called Isolation, and although it presents a very cold and bleak vision of digital culture, here at the Media League we’d like to think that our creative platform is a bit of a counterweight to some of that isolation. Isolation scored a 4.42.

In Game 2 – Living Fashion it was John P Stevens once again rising to the top, with a gorgeous watercolour called Era of Entertainment that scored 3.97. Evoking theatricality, high fashion, silky textures and mysterious beauty, this is definitely a very refined version of Living Fashion. 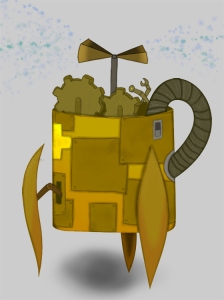 In Game 3 – Imagine Science, it was Power On that powered to the top of the individual Game Media leaderboard with a mysteriously mesmerizing contraption called Steampunk Imagination, which scored a 4.12. Floating as it is above an amorphous background, the gears and hoses and propellers speak of strange sounds and stranger possibilities, suggesting – among other things – an intelligent vacuum cleaner. Nice work Power On!

In Game 4 – Good Eats, John P Stevens took back the individual Game Media title with a lovely and colourful canvas called A Healthy Breakfast that scored a whopping 4.65. Evoking a dreamy and delightfully nutritious relationship with food and the earth, this is a deeply hopeful as well as gorgeously executed work.

In Game 5 – Mashup Madness, it was John P Stevens yet again, this time with a delightful illustration mashing up man and machine in Binary Mashup, which scored a 4.7. The illustrated worker-drone is both playful and realistic, but the tension and alienation of his double-identity is emphasized by the scratchy white lines, which resemble both ancient runes carved into rock and the tentacles of bugs clawing their way into his and our world. A relatively cheerful surface with a darker substratum…

In Game 6 – Street Life, the last game of the regular season, it was The Imaginators making a late and thrilling surge. Their powerful critique-slash-celebration of urban streets called (suitably enough) Street Life, scored a 4.75, the 2nd highest score of the season. And for a good reason. It should be on your playlist!

But in the Semi-Final Game, whose theme was Time, it was John P Stevens back in the saddle again, with a haunting portrait of time called Grandfather Clock, which scored a 4.84, making it the single highest scoring piece in the entire season to date. Congratulations to JP Stevens for their success! And to the Imaginators and Power On for their work too!

And to all you visitors to this viral gallery, don’t forget to check out the game in action now, to view and share the pieces you like, and to help us crown a champion. Over and out with 6 days to go in the Finals. Stay tuned…