The Walrus Talk at the Canadian Museum of Nature on Thursday night took The Arctic as its theme, and the evening was as inspiring and illuminating as previous events in this ambitious national series. It also demonstrated with stunning clarity the conflict between communications cultures that is my main topic on this blog. As usual, however, that conflict was unacknowledged by the participants who cast it in such sharp relief. So I’m going to break it down here…

The Walrus talks have a simple but very effective format. 7 diverse and accomplished  speakers get 8 minutes each to talk about a theme with which they are deeply engaged. Last night the theme was the Arctic and we heard from an Inuit elder mapping her culture on Google Earth, a biologist who has collected thousands of samples from the arctic, an entrepreneur promoting sustainable economic development in the north, a youth worker trying to reduce the horrific number of suicides among the Inuit, an activist who has built an online platform that allows Inuit hunters to track and share information about ice conditions, and more. 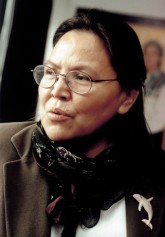 The first speaker was Fibbie Tatti, an elder and trained linguist, and as a member of the Dene people of Great Slave Lake someone born into an OS1 (oral) culture under sustained attack by OS2 (literate) culture. Her response was to initiate a bridge to OS3 (digital) by interviewing the community’s oldest elders and uploading their geographical, linguistic, spiritual and practical knowledge about their hereditary land onto Google earth in the Deline Mapping Project.

Meanwhile Joel Heath, co-founder of the Arctic Eider Foundation (and an award winning filmmaker to boot) showed off several ambitious interactive tools that also seek to bridge OS1 values and communities with OS3 tools, such as this Interactive Knowledge Mapping Platform for Community-Driven Research.

I believe that the work described by both of these speakers is extremely important and my hope is that it will serve as an inspiration to digital natives to recognize the extraordinary value and potential of building bridges from OS1 to OS3 and back again. There is so much more to do…

Meanwhile, by way of contrast, the Walrus Talk also featured an impassioned presentation by Jeffery M. Saarela, a research scientist and director of the Centre for Arctic Knowledge and Exploration at the Canadian Museum of Nature. His speech was accompanied by slides featuring rows and rows of dead birds and plants, part of a collection of nearly 15 million arctic specimens that he proudly proclaimed the largest in the world.

The value of this work, he explained, was that his collection enables us to establish baselines that permit accurate measurement of changes to biodiversity in the north, such as the extinction of certain flora and fauna, like the long-departed giant Auk. Which is no doubt true. But it was also extraordinary to witness OS2 values embodied so profoundly in this work and in the passion of a man who seemed to believe only in that which can be fixed on paper, without any apparent sense of responsibility or understanding of how scientific research participates in the very ecocide he is busy documenting. It was remarkable to witness such a deep commitment to that which is dead, to data and bones that collect dust and funding but are finally and forever dead, and the refusal to commit to anything more than carefully observing the end of the world.

But either way, I much prefer the song that Fibbie Tatti sang to us in her native tongue, of the great lake that is at the heart of the world, a song that breathes life, that calls for dialogue and compassion, a song you can build a future on, as well as a past. A song to live in, together, in the present. A living network. A bridge to somewhere we might all want to go.

Because bridges from the earth wisdom of our oral ancestors to the networked hyper-efficiency of our networked future, bridges that leapfrog the ecocidal and egotistical literate present, are our only hope for survival.