Saturday was a glorious fall day with blue skies and bright sunshine. At 3:30 pm I was in The New Schools’ Wollman Hall, having just given a talk on post-literate activism at the Mobility Shifts conference, when we started to hear the unmistakable sounds of the Global Day of Protest march going by below. Drums and whistles and cheers and sirens. And although the discussion was still going on, soon a bunch of us couldn’t take it any more and we ran for the stairs and the street.

We merged into what turned out to be the very tail of the march, which was moving slowly and joyfully up the east sidewalk of 6th avenue. We had no idea how long the march was since we couldn’t see past all the signs people carried and we weren’t allowed to step into the streets by the police, who were flanking the march in very large numbers. This is more or less what it looked like, though where we were walking there were many more police. 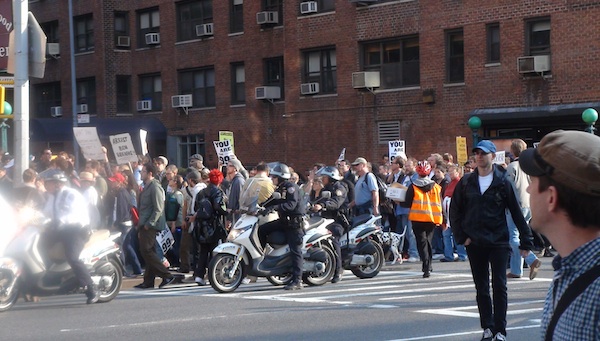 This march was entirely different from the night before at Zucotti Park, which had been so depressing. This was fun, it was focused and it was filled with articulate and passionate and capable people talking to one another. It was hopeful, child-friendly, sexy even. Lots of chanting, lots of creativity, lots of anger and hope. And although there were many police, and even though the paddy wagons screaming up 6th avenue one after another were worrisome, it felt much less controlled than the actual encampment had. This really did feel like the people taking back their street and their country. Or starting to.

It took a good 2 and a half hours to walk from 11th street to 47th street, where we took a left and started to flow into Times Square. But at this point things started to get weird. Suddenly there were large groups of police rushing to and fro. A half-dozen mounted police clacketed past on horseback. Then a convoy of motorcycles. I was getting uneasy, and just in the middle of telling my musician friend about the ‘kettling’ techniques used by police in the Brooklyn Bridge march he pointed out that suddenly all the police were now carrying large bunches of plastic handcuffs. And then I saw the orange police barrier come out. For different reasons, neither my friend nor I had any desire to be arrested. So we ran for it, hurrying back to 6th ave. We felt sheepish but later I learned that 42 people were arrested on 47th street. It had been a close call.

We made our way to Times Square through less congested streets and joined the many thousands of protesters who had taken it over. Or had they? Again, the police presence was so strong and so organized that one really did feel that it was a sort of permitted event rather than space we had taken. Yet it was fun. There were innumerable tourists and average new yorkers mixing in with the thousands of protesters and the whole thing was invigorating and inspiring. Which, since the participants have so little in the way of formal political objectives, and since it inspired so many similar marches around the world, must be counted an important end, and possibly the most important end of all.

2 thoughts on “Occupying Wall Street – The Bad, The Good and the Uncertain – Part 2”